Strange noises from machines play on my mind.  None more so than when that niggling noise starts to get worse.  Noises like that usually mean two things.  Catastrophic failure and expense.

Time to disconnect from the mains and fetch the tool box.

The patient in the surgery this week is our own Hotpoint tumble dryer.  We avoid using it at all costs, but with miserable English weather and two children, getting washing turned around efficiently, ready for use is mandatory.  To be frank, I’d noticed the excess whinning bearing noise coming from the dryer for a few uses, but it was getting to the point where it was hard to ignore.

Electric hot air tumble dryers are pretty simple things.  They work by sucking cool air in, heating it up under thermostatic control and then blowing it in to a rotating drum.  The moist air is then expelled via a filter and then hose, to atmosphere.  Tumble dryer models of this kind will have the following:  A motor, heater, thermostat circuitry, timer and a drum.  There isn’t much to go wrong and many parts for UK tumble dryers are available, cheaply from places like eSpares.co.uk.  Usually, no special tools are required if you want to have a go at fixing your machine and I recommend you do of course.

After opening up the cabinet, access to the drum and motor was available by the side panel which was held in position with several self-tapping screws and hooks.  Care must be taken if you attempt something similar on your machine since there are plenty of sharp edges to watch out for.  This dryer features an AC induction motor (which has no motor brushes).  It has a spindle which runs through the motor with a pully one side to drive the drum via the belt and a fan the other to blow the hot air.  Removing the belt and spinning the motor by hand revealed the problem.  The spindle spun OK, but sounded rough.

Replacement motors are available at a reasonable £90 or so, but you know me by now, I don’t like spending that kind of money, unless I have to.

The motor is attached to the appliance with simple bolts and is removed easily.  The motor is held together with self-tapping screws, which are easily accessible.  Just two bearings feature in this motor; one at each end to support the load.  Both bearings sounded rough, but seemed not to be worn too much.  The bearings are standard items and it would be easy to find exact replacements from a bearing supplier (rather than replacing the whole motor), for under £20.  However, as this was my own machine, I went for cheaper fix, to squeeze more life out of what I already had.  With the dust cover popped off from both bearings, I cleaned both with isopropyl alcohol cleaner and then re-greased with quality high-melt point bearing grease.  Much better.

The motor re-assembled, re-installed back in the machine and it was time to switch on.  It now sounded as sweat as a nut.

If and when the bearings get noisy again (and they will eventually), I’ll replace the bearings with new ones.

Battery charger repaired at the workshop

My in-laws have an ornament on their drive, in the shape of a 2001 MGF roadster.  I say ornament because it’s fairly stationery, all of the time.  Even so, it’s battery gets topped up once in a while and the engine turned over when the urge presents itself.  Because the car isn’t used, the battery’s only means of charge is via a plug-in charger, my father-in-law occasionally hooks up.

The battery charger in question is an Ultimate Speed (Lidl brand) universal battery charger.  They’ve been on sale in the UK for a number of years at the £15 (approx.) mark.  They’re really good value as they allow ‘smart charging’ of car and motorcycle batteries without the risk of damage at a fraction of the price of the ‘big brands’ or a replacement battery.

However, this charger decided that it wasn’t playing anymore and refused to offer it’s charging services when recently connected to the MG’s flat battery.  On it’s way to the great bin in the sky, I managed to divert the charger via the workshop.

Once connected to the mains, the standby light illuminated, indicating something was actually happening, but upon connecting the low voltage side to a battery, making a charge selection via the single push-button switch, nothing changed and the whole unit remained on standby.  Pretty annoying.

Luckily, I have the triangular screwdriver required to undo the six screws that hold the (IP) ingress protected casing together.  Triangular screw heads are annoying and pointless as they prevent, in my opinion, people with a basic tool set having a go at a repair like this.  If you do fancy getting one of these tools, they are easily available on Amazon and eBay. 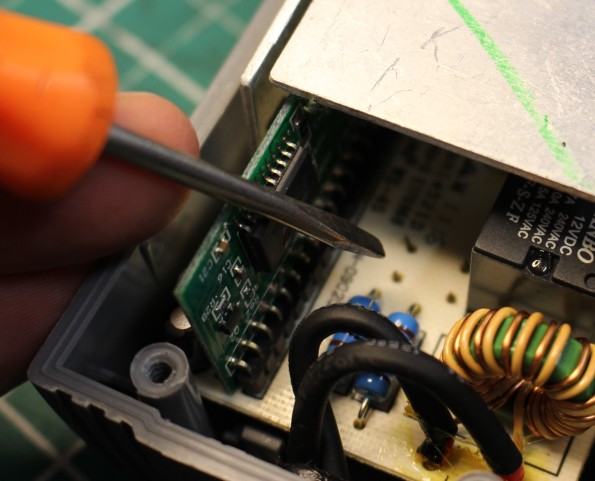 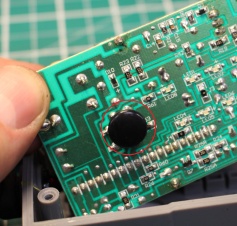 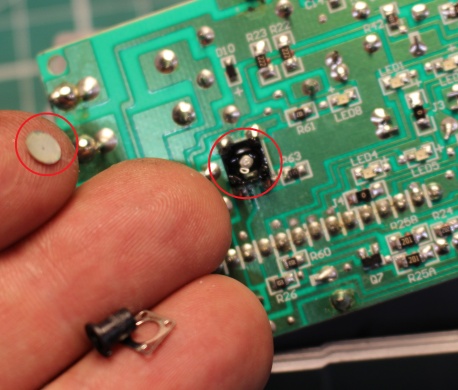 On with the fix.  With the casing opened up, my first port of call was with the switch itself.  Past experience has taught me to 1; start with the easy stuff and 2; these push to make switches fail all the time.  They’re in everything from door bells to cookers at the moment and when faulty, make the most expensive item and expensive paper weight in the blink of an eye.

To test the switch, I connected the charger to the mains and hooked up the low voltage end to a battery and simulated the button push switch by shorting out the switches connections on the circuit board.  Hey presto, the charger worked perfectly, every time.  The switch either needed repairing or replacing.

Because I’m a skin-flint, I opted to see what could be done with the present switch.  With care, these switches can be prised apart, using a sharp knife and the insides cleaned.  I took the switch apart which revealed nothing more than slightly corroded switch surfaces.  I can only assume that the product’s bold IP rated claim is a little over exaggerated and that some damp had wriggled its way to the switch and mucked it up.  With a cotton bud and switch cleaner, the switch surfaces scrubbed up like new and I re-assembled the switch lever and securing plat using a soldering iron to re-melt the plastic nubs holding the switch together.  No one would ever know it had been in bits.

With the circuit board returned to the housing, all six screws done up, the charger was back to rude health once more and ready to tend to the stranded MGF.

The diary of a tinkerer: Stories, advice, tips and sometimes the odd failure to inspire your own repair.

The diary of a tinkerer: Stories, advice, tips and sometimes the odd failure to inspire your own repair.

The tinkerer at FixItWorkshop.co.uk is Matt Marchant

I love repairing things and hate throwing things away that can be saved. There’s far too much waste in the world.  Many things that can sometimes appear unrepairable, are indeed repairable, with a little tinkering. I want to encourage people who doubt their own ability to repair their things, to give repair a go.  After all, if ‘that thing’ isn’t working, grab a screwdriver, take it apart and investigate.  What have you got to lose? I’ve been tinkering with bikes, cars, coffee machines, toys and vacuum cleaners and pretty much anything that can be dismantled since I could hold a screwdriver.  I’ve worked for BT as a senior engineer, and I’ve studied design, business and electronics. Enjoy the repair diary of a tinkerer.  I hope it gives you a nudge to repair your broken thing.  If you can’t, I might be able to help.

Scroll through articles on repairs, views and news.