Battery charger repaired at the workshop

My in-laws have an ornament on their drive, in the shape of a 2001 MGF roadster.  I say ornament because it’s fairly stationery, all of the time.  Even so, it’s battery gets topped up once in a while and the engine turned over when the urge presents itself.  Because the car isn’t used, the battery’s only means of charge is via a plug-in charger, my father-in-law occasionally hooks up.

The battery charger in question is an Ultimate Speed (Lidl brand) universal battery charger.  They’ve been on sale in the UK for a number of years at the £15 (approx.) mark.  They’re really good value as they allow ‘smart charging’ of car and motorcycle batteries without the risk of damage at a fraction of the price of the ‘big brands’ or a replacement battery.

However, this charger decided that it wasn’t playing anymore and refused to offer it’s charging services when recently connected to the MG’s flat battery.  On it’s way to the great bin in the sky, I managed to divert the charger via the workshop.

Once connected to the mains, the standby light illuminated, indicating something was actually happening, but upon connecting the low voltage side to a battery, making a charge selection via the single push-button switch, nothing changed and the whole unit remained on standby.  Pretty annoying.

Luckily, I have the triangular screwdriver required to undo the six screws that hold the (IP) ingress protected casing together.  Triangular screw heads are annoying and pointless as they prevent, in my opinion, people with a basic tool set having a go at a repair like this.  If you do fancy getting one of these tools, they are easily available on Amazon and eBay. 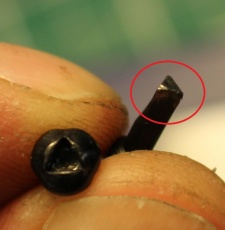 On with the fix.  With the casing opened up, my first port of call was with the switch itself.  Past experience has taught me to 1; start with the easy stuff and 2; these push to make switches fail all the time.  They’re in everything from door bells to cookers at the moment and when faulty, make the most expensive item and expensive paper weight in the blink of an eye.

To test the switch, I connected the charger to the mains and hooked up the low voltage end to a battery and simulated the button push switch by shorting out the switches connections on the circuit board.  Hey presto, the charger worked perfectly, every time.  The switch either needed repairing or replacing.

Because I’m a skin-flint, I opted to see what could be done with the present switch.  With care, these switches can be prised apart, using a sharp knife and the insides cleaned.  I took the switch apart which revealed nothing more than slightly corroded switch surfaces.  I can only assume that the product’s bold IP rated claim is a little over exaggerated and that some damp had wriggled its way to the switch and mucked it up.  With a cotton bud and switch cleaner, the switch surfaces scrubbed up like new and I re-assembled the switch lever and securing plat using a soldering iron to re-melt the plastic nubs holding the switch together.  No one would ever know it had been in bits.

With the circuit board returned to the housing, all six screws done up, the charger was back to rude health once more and ready to tend to the stranded MGF.

Hi, my name's Matt and I'm on a mission to save everyday items from the bin. Many things are repairable, but we've seemingly fallen out of love with mending things. I aim to fix that by publishing each repair I carry out in the hope that others will be inspired to repair their things and keep them for longer. View all posts by fixitworkshop.co.uk

6 thoughts on “Ultimate Speed Battery Charger from Lidl, on standby”

This site uses Akismet to reduce spam. Learn how your comment data is processed.