I struggle to buy a replacement part for a reasonable price.

I’ve been meaning to do a little article on this problem for a while and I apologise in advance if (you’re still reading) this seems like a rant.

Recently our electric wall shower gave up the ghost and tripped the electrical breaker in the fuse cupboard.  Not great when it happens mid-wash.

The shower was a few years old and registered with the manufacturer for support for things like recalls and so on.  I had fitted the shower myself and it it had been a reliable product until this point.

Out with the screwdrivers and multimeter.

The 8.5kW heating element is split into two circuits, one for half-power and one for full.  Most people would use full power, but you might be able to get away with using it on half or economy mode in summer, when the water feed is generally warmer.

All micro switches seemed to be working OK, which was a bit of a shame actually as it meant that the heater can was probably faulty.  It was.  Half the heater can tested OK, the other half was dead.  Oh dear.

After visiting some shower spares suppliers and the manufacturers’ own website, I discovered that the spare part I needed wasn’t cheap at over £50 delivered.  I saw some advertised for £70 on some third-party sites.

I was fuming.  Why so expensive?  I mean, you’d have to be out of your mind to part with your hard-earned cash on a spare part like this when you can buy the whole unit for less.  See below.

The Cara shower has been replaced by the Enrich and is basically the same product, by another name.  Therefore, the high price of the spare part in this instance cannot be blamed on low manufacturing volumes as the showers are still made, are widely available and have been in production for a long time.   Something is ethically wrong with Triton’s spare parts pricing policies.

Now, I don’t want to beat-up Triton, they’re not alone and many manufacturers do the same, but there are now many forward-thinking companies out there getting it right.  Maybe Triton will revisit their spares listings.

Despite my natural leaning to repair and recondition, I had to admit that simple logic won the day and I bought a whole new unit from Screwfix.  The Enrich shower fitted exactly where the Cara had been and worked perfectly.

I thought about this situation long and hard and decided that for this type of appliance, a spare part should not cost more than 30% of the current retail price.  In this instance, I would have been prepared to pay about £15.00 for a spare part.

In a world where we need to encourage people to repair appliances (and anything else) manufacturers need to facilitate a reasonable and proportionate spares back up service.  It’s as simple as that.

Still, there is a bright side to this tale.  The old shower’s solenoid, mixer, control knobs and switches all work fine and I’ll keep those as spares to be used again in a shower or something else that comes along.

It’s important to talk about failure as we can often learn from it and this brief write-up is all about something which left the workshop, ready for recycling.  I made it go bang, sadly.

Remember TVs before the networks ‘went digital’? They had analogue tuners built-in, which received the signals.  With so many old TVs out there, manufacturers sold digital set-top boxes, which allowed an older TV to work with the new digital TV stations from about 2007.  Since then, manufacturers include a digital receiver within their TVs of course and this particular device now seems a bit of a museum piece.

This SEG DVB Digital TV box had failed completely, so off with the lid.  Once open, the printed circuit board (PCB) was revealed.  The PCB on this device was made in two halves; one for the TV reception stuff and one for the power, the conversion of mains electricity to lower DC working voltages.  The power part of the board had some visible damage and it appeared that a smoothing capacitor had gone pop.

As it happened, I had a similar device on the shelf I was gradually stripping for spares and was able to quickly identify a suitable replacement.  Once re-soldered in and powered-up, nothing happened!

Then I spotted an on-board fuse which had also failed, but I didn’t have one of these, so I decided to temporarily short the fuse connections to make a connection.  That’s when things got smoky.

I’d missed the fact that a small transformer on the PCB had a winding short on it, which had impacted on the rest of the components.  Bang.

Never mind.  Digital boxes are still available online and that’s what I did, I ordered a new one.

Although I didn’t win this one, it’s important to have a go and that’s the whole point.  If it’s not working to begin with, what’s the worst that can happen?

Sadly, I couldn’t save this Parrot

I seem to be having a run of failed repairs at the moment and while it’s disappointing to write-up a repair that didn’t succeed, it’s important to learn from failure.

A colleague asked me to look at a Parrot camera drone recently as one of the drone’s motors wasn’t running correctly.  The fault developed after a visit to a lake where it got a little wet.  It turns out that this model isn’t water-proof, despite the £300.00 price tag!

After drying out, when powered back up, one of the four motors wouldn’t spin at full speed.  These motors seem to operate in several phased windings and it would appear that one of the motor’s phases was missing.

Upon opening up the drone, I discovered that the PCB had indeed suffered water damage along its main processor.  However, three of the motors were fine and camera was working OK.

The double-sided printed circuit board (PCB) presented me with a dilemma.  This PCB was fitted with extra tiny components and multi-layered board technology, presumably to save weight and cost, so a repair using conventional soldering techniques was unlikely to get good results as the excessive heat would more than likely damage other components.  Located near the wiring connector that connects to the motor that wasn’t working properly, were several tiny surface mount fuses, one of which appeared to have failed.  Assuming I could locate the right component, attempting a repair on a PCB like this would more than likely yield a molten mess! At this stage I could have used a conductive glue to bond in a new component or temporarily bridge the fuse, but on the basis that I couldn’t guarantee a repair and the fact that there seemed to be water ingress to the whole PCB, I decided that a complete PCB replacement was probably needed.  Sadly, I had to return the drone back to the owner with the bad news.

I couldn’t repair this one…

I don’t normally take on microwave repairs.  I don’t have reasonable means of testing, even if I managed to get something working.  However, a friend asked me to look at this one to see if ‘something simple’ had failed.  This particular model also fitted nicely in her kitchen on existing wall brackets and the thought of refitting all the brackets for another machine seemed daunting!

The microwave was doing something strange:  With microwave plugged in, the turntable turned slowly on its own, the display and control buttons completely unresponsive.  Disconnecting the power first, it was time to completely ignore the ‘do not remove cover’ sticker and remove the cover.  Hey, someone must have assembled it to start with?

A quick look at the control board revealed no obvious faults and all the thermistors and micro-switches seemed to work OK.  Since there was no other item controlling the components in the oven, it was off with the control panel PCB.  After basic testing of the surface components, I decided to run the soldering iron over the connections, in the hope that I might clear a dry joint.

This was not to be.  With the PCB reconnected, the oven powered up, the same thing happened, the turntable operated by itself.  The board was duff!

Sadly, this microwave is heading for the great scrapyard in the sky since control boards for these ovens are outrageously expensive with the cost of replacement far outweighing the cost of a complete machine.  This is such a great shame.

I doubt that many parts vendors sell many of these PCBs as most owners wouldn’t bother to order at the prices I’ve seen.

Still, we tried to save it.

I couldn’t save the Sun Solar Systems Inverter…

On the back of my Sterling Power Products inverter repair (https://fixitworkshopblog.wordpress.com/2017/04/07/sterling-power-products-pure-sine-wave-inverter-repaired/) a customer enquired to see if I could repair his faulty inverter.

The customer’s inverter had been connected up properly but had been severely overloaded and  it would appear that the protection modules within the inverter had not operated correctly.  Therefore a burning smell had been reported, just before final failure.

This was going to be a difficult repair as I had no schematic diagram for the main PCB and I was effectively going to be testing components in isolation using rudimentary methods.

A quick look around the inside of the unit revealed no obvious damage, but upon testing the IBGT transistors on the units’ high voltage output and several Zenner diodes in line with them, revealed serious damage to that part of the circuit.

These components are not cheap and collectively, the cost in parts alone would have been over £50, without my time factored in and without the guarantee that the unit would work again.  On that basis, sadly, I had to inform the customer that the unit was beyond my help and probably beyond economical repair.  It will therefore be disposed of responsibly at our local amenity tip. 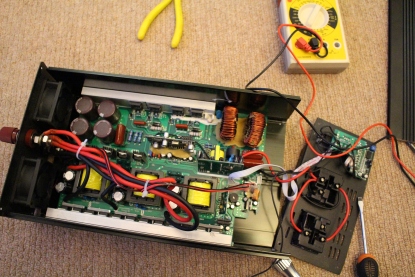 Search the workshop for a featured repair