Another Chef enters the workshop with a smoking habit that’s hard to kick.

Top tips for keeping your Chef running smoothly, for longer:

This A901E Chef had a developed a smoking habit.  Due to age, one of the capacitors had failed on the speed control circuitry making a lot of smoke while in use.  An adjacent resistor had also split in half during the failure.

Despite a smoky situation, there was hope for the Chef.

Removing the motor on these mixers is pretty straightforward.  Just remove the blender accessory power take off cover and remove some screws.  Lift up the top half of the mixer on the hinge and you’ll get access to the base of the motor area.  After you’ve removed the belt, the motor should come out.  There’s a bit more to it actually, but there isn’t much holding that motor in.

The later A901E features a better speed control circuit than the earlier A901 and it’s also made on proper circuit board, rather than just soldered-together components.

With this machine, the correct repair kit was obtained and fitted, so the circuit was as good as new and wouldn’t smoke anymore.

I treated this Chef’s motor to new motor brushes since the old ones were worn.  I also fitted new feet, as the existing ones were squashed and one was completely missing.

I was about to sign the job off , when I noticed a small tear in the outer cable flex.  I couldn’t let the Chef out of the workshop like that, so I had to replace it with a new piece.

After some fettling, the machine was running like clockwork, once again.

A Chef repair gets it’s own video!

I carry out a few Kenwood Chef repairs a year and usually, they can be brought back to full health with simple tools and repair components.  I’ve not had a faulty Chef brought in to the workshop which hasn’t left ready for service.  Yet.

One common theme with all older machines is that the motor speed control circuitry can fail which either manifests itself with symptoms including, but not restricted to; electrical burning smells and smoke, the motor not running smoothly or not running at all.  While the failure of a Kenwood Chef may look spectacular when it happens, the repair is fairly straightforward, if you have some basic skills, tools and some patience.

This particular A901 came in with four faults; poor feet condition, cracked cowling, the speed control knob was loose and once I opened up the motor unit to look further, burned-out capacitors.

To some, this list of faults might seem a bit daunting, but it’s standard fare on a Chef of this age and to be expected after thirty plus years service.  Due to the excellent design of the product, the faults are all repairable with commonly available parts.

After about an hours’ work, the feet were replaced, the motor circuitry repaired and the replacement cowling refitted.  The speed control knob had come away from the motor body and only required the pin that held it in place ‘pressing’ back in to the housing, resulting in one happy mixer.

One of my aims on this website is to share my experience and best practice so for the first time, I made a video of the complete motor repair in real-time.  So, if you have a Chef to repair and twenty minutes, grab yourself some popcorn, a notepad and pen and enjoy.

I’ve repaired a few Kenwood Chefs recently, but this one seemed worthy of a mention on these pages as it’s slightly different to the ones I’ve repaired so far. 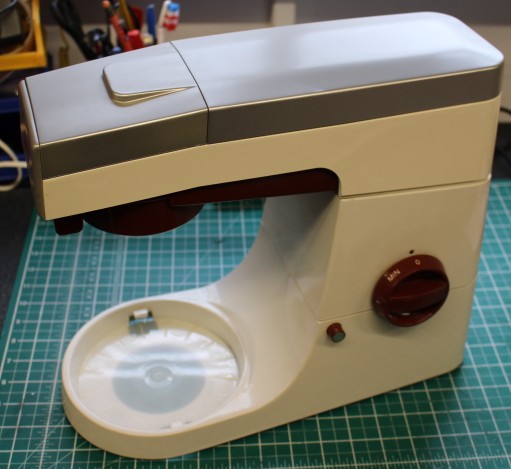 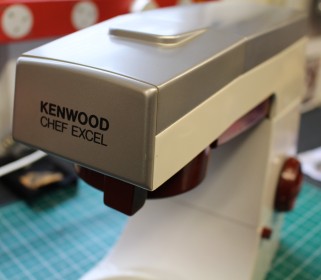 Many Kenwood Chef accessories are usable on Chefs from all eras, due to logical thinking by the designers over the years and this is something to be applauded as it reduces waste.  For example, the beater on a 1970s machine will fit one from today.  An interesting fact for any occasion.

I’ve repaired many A701s and A901s, but this was the first A902/4, so I thought I’d share some of my repair experience in order to help others.

The owner contacted me explaining that she’d been using the family’s cherished Chef to make a cake when a plume of smoke started coming from the mixer.  The smell was bad and she’d quickly disconnected the unit from the mains.  The owner then contacted me to ask ‘was the Chef worth repairing’?  Of course it was!

I suspected the infamous speed control components which tends to fail with age.  However, this model featured extra components all mounted on a neat printed circuit board (PCB) which is fixed near the motor.  A reasonably priced repair kit, with new rubber feet was available online so I ordered one up straightaway.

Opening up the A902/4 is a similar job on many Chefs and after removing a few screws, the motor and gubbins is available for maintenance.

As suspected, two out of the three capacitors on the PCB had blown visibly, due to crystallisation and general fatigue, so these needed to be replaced.

As all the components are PCB mounted, each part must be de-soldered first, contacts cleaned before re-assembly which is time consuming, but satisfying and even though I’ve done this kind of work many times before, I always take a couple of photos and mark wires with a pen or label, as it’s very easy to make mistakes later.

The kit included replacements for the faulty bits, plus some additional parts which should be changed as a matter of course.  I also chose a kit with replacement rubber feet for the machine as the ones fitted had squashed ‘flat’ with age, a very common problem with the Chefs of this vintage.

New components fitted, the motor ran sweetly once again, without smoke, wobble or extra noise.  It’s worth noting that the A902/4 is quieter than earlier Chef models and is probably worth seeking out if you’re in the market for a second-hand unit.