A cheap radio gets a cheap fix.

I love a good radio.  I used to collect them as a kid, working or not, do them up, get them working and I eventually ended up with, er… lots.  I’ve since scaled my collection back a bit these days to around 10 or so, quite frankly more than is healthy really.

So when someone got in touch recently with a broken DAB radio to fix, I got quite excited.

These Bauhn DAB radios (available from Aldi or Lidl in the UK, I think) were on the market for about £10 and at that price they represent great value when compared to more expensive devices.

However, the one in the workshop appeared to have a problem power connector, which when wobbled, made the radio work intermittently.  Suspicious.

Having already repaired a similar radio with a similar fault before, I decided to video the repair to encourage others to check theirs, if something similar happens.  I hope you find it useful.

A fan with a wobbly tale…

Now, before I start the story, I have a confession.  I technically stole this room fan.  I didn’t pay for it, I just took it.

Just before Christmas 2017, I noticed that a room fan had been dumped in the small carpark at the end of my road.  At first, I assumed that it was being left on a temporary basis, ready to be taken to the tip in a responsible manner, but as the days and weeks rolled on, it became clear that someone had carelessly left it there to turn to rust, which seemed a shame.

I did the only responsible thing; pick it up off the ground and take it back to the workshop in broad daylight.

Once I’d allowed it to dry out, I plugged it in and guess what, it powered up and ran on all three speeds without an issue.  Its operation was very smooth and quiet.  On closer inspection, it didn’t seem that old to me.  How strange.

The major problem with the fan was that it didn’t stand up properly, in fact it would fall over easily.  The fan’s base stand was a simple cross-section of metal feet, supporting the main pole which holds the fan itself.  The whole assembly was loose and being held together with masking tape, which was far from ideal.

Once I’d removed half-a-roll of masking tape from the stand, it revealed that one of the screws that holds the main pole to the stand was missing and the remaining three were loose.  Could it really be that simple?

Once I’d straightened the slightly bent metal work in the vice, replaced the missing screw with one I already had in my nut and bolt pots, tightened the rest up, the stand performed as a stand once again and the whole thing worked without wobbling in a drunken manner. 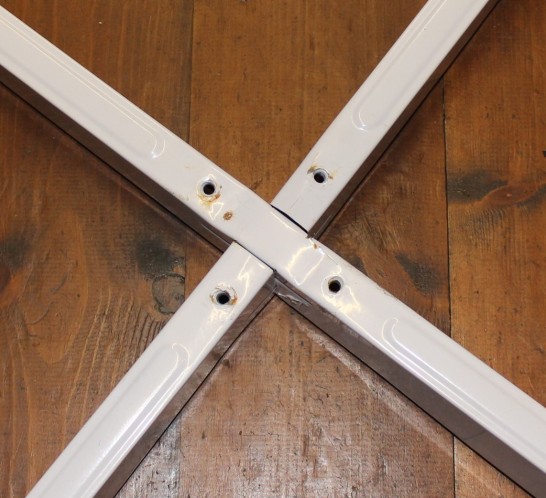 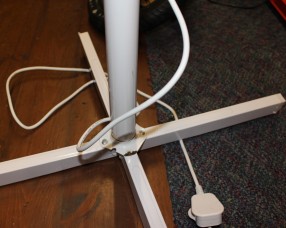 Now, this probably wasn’t an expensive item.  It’s not the finest example of good design or build quality.  But it struck me then that the otherwise fine fan had been condemned on the one missing screw and the owners’ simple lack of screw driver aptitude.  Crazy.  I find it very sad that something with plenty of life left in it ends up dumped in a car park over one missing screw.  Some people have a very disposable and wasteful view of everyday items.

I did repaint some of the rusty metal work after these photos were taken.