Save time and money with a multimeter and a quick look at alkaline versus rechargeable batteries. 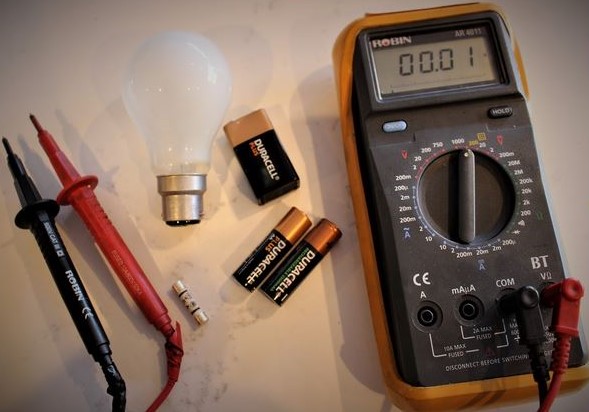 Batteries are needed for all kinds of toys, remote controls and the latest gadgets. With a smattering of basic awareness, a tool like a multimeter can be used by anyone, saving one time, cash and help to save waste and who wouldn’t want to do that?

For under £10 (GBP), a decent multimeter can be bought online and, armed with a few YouTube videos on your phone, you’ll be able to test batteries to see if they’re still up to scratch, test domestic fuses in plugs when the lights go out and prove that power adaptors are OK before buying new.  And that’s just the start, exciting eh?

I’m not going explain every function on a general purpose multimeter, but I do want to dispel one myth: Multimeters are difficult to use. They simply are not. Assuming you can turn a dial and read a number display, then all you have to do is put the test probes on the right part and then voilà, you’ll be ready to measure things.

Take a standard 1.5V AA battery. It has a + (positive) end and a – (negative) end. The red probe should touch the positive end and the black lead should touch the negative end, it’s that simple. Assuming that you’ve selected the DC voltage (10’s) range, a good AA (alkaline) battery will show between 1.5V and 1.68V when new. Anything less and the battery is starting to fade and may need to be replaced.

It’s worth noting at this point that some things are capable of running on less battery juice, for longer. Take a quartz clock with one AA battery. Chances are that it will run for years on a battery, even though over time, the voltage will fall below 1.5V. If you put that same aged battery from the clock into a toy car for example, the chances are that the toy wouldn’t work properly or even at all. To some things, battery voltage is critical, others not so much.

What about normal alkaline batteries versus rechargeable ones, I hear you say faintly, are they worth it?  As with all things, it depends.  Not all battery specifications are the same, so check details carefully when making a purchase.  It’s easier than you think.  Based on detailed shed-based experiments, I generally use rechargeable types in items that tend to use-up batteries quickly, such as radio control car toys and so on.  For something like a clock or a TV remote control handset, where batteries tend to last longer, I recommend conventional types as these items are sometimes more sensitive to voltage differences.  The aim overall is to buy fewer batteries and by using rechargeable ones, which are generally more expensive to get started with, in things that ‘eat batteries faster’, they begin to make economic sense.

Here’s something you’ll be familiar with.  You go to use something that takes batteries that you haven’t used for ages, only to find that it won’t work.  Upon opening up the little battery door, you’re then greeted with an unpleasant mass of rusty, acidic battery leftovers which have been festering since last Christmas.  In situations like this, many will simply throw away, but often, all that’s required is light restoration with contact cleaner, maybe some wire wool and something like kitchen roll.  More serious battery contact damage can often be solved with new battery contacts, which are available on eBay for small change.  Remember, remove batteries when something’s not in use.

If you don’t already own one, make sure you add a digital multimeter to your birthday list this year. Now go and recharge your own batteries with a nice cup of tea.

A Braun Oral-B electric toothbrush gets a new lease of life.

I was given an Oral-B/ Braun electric toothbrush as a birthday present years ago, which when you think about it, is a bit of a strange thing to receive as a gift.  Maybe the gift contained a hint?  Back then, these toothbrushes were not cheap, starting at about £60.00 if I remember correctly.  Today, a new equivalent is quite a bit cheaper. 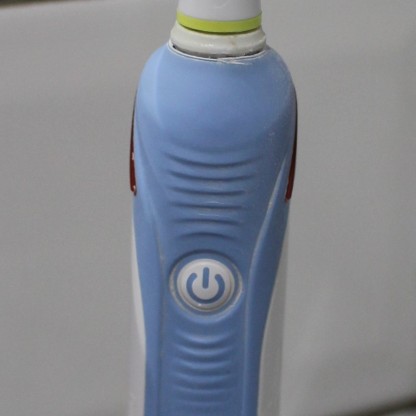 In the time I’ve owned it, it’s had about 40 new brush heads and it’s just about to start it’s third non-replaceable battery.

Electrical items with non-replaceable batteries are so annoying.

A message to manufacturers:  There’s simply no excuse for it as all batteries are replaceable.

In my experience, items with ‘non-replaceable batteries’ contain entirely replaceable items.  The batteries might not be standard ‘AA’ items, but there’s a host of online suppliers that are ready to supply just about any power cell for any application, you name it, usually for a reasonable price that costs-in for the repair process.

Now, I don’t know how long one of these toothbrushes is meant to last, but as a long-term test, I thought it would be interesting to find out.  After the first battery died, I decided to take the toothbrush apart, to see what was going on inside.

As you can see from the photos, there’s more within than one might think.  There’s a switch, charging circuit, timer circuit, over-pressure circuit, gearbox, motor, mini crankshafts and a battery.  Not to mention all of the tiny connecting parts all neatly engineered to work together, reliably.  It’s a small work of art really.

It makes me very sad that most of these toothbrushes will end up in landfill, after a few years.

The designers had clearly designed this toothbrush as a disposable item as the battery, despite being readily available from spares suppliers, was hidden, out of sight, under all of the gubbins.

To extract the battery (a simple nickel cadmium item) a full dismantle was required, in this order.

Twelve years down the line and now on its third battery cell, the toothbrush is still going strong which proves that with a little tinkering, disposable items can be repaired and made to last longer.

It’s just a shame that Braun, the manufacturer, decided to ignore any notion of consumer maintenance.