Tomy (UK) /Robie (US) Mr. Money repaired in the Workshop

I have a real soft spot for novelty toy robots that actually do something.  I think I’ll make a point of collecting more.

Hours spent on repair:  About an hour

A lady got in touch with me on the back of an article I wrote a while ago about a faulty Mr. Money toy robot money box.  My Mr. Money had gone wrong as I’d left an old battery inside which had then leaked.  A major clean-up and tinker was then required to get it working again.

This particular Mr Money belonged to the lady’s husband and was to be ‘given to him again’ as a 40th birthday present.  What a nice thought.  The only problem was that Mr. Money had stopped working long ago; put away and forgotten about.  He needed bringing back to life.  Perhaps there was a hidden message to the husband to save for something?  Who knows.

Mr. Money arrived well packed at the workshop and I wasted no time in taking him apart.  There was no evidence of battery leakage or accidental Cadbury Button ingestion and he was generally in good condition with no bits broken off.  A good start.

Mr. Money is getting on a bit and when taking apart any toy, let alone one that’s over 30 years old, one must be careful not to accidently snap-off any lugs or tangs that hold things like casing and levers together.  Very tricky.  It’s not something I usually attempt after a day at work, when I’m shattered.

After some rooting around in the depths of the mechanism, I noticed that the ‘limit switch’ was a little dirty and that some of the contacts needed a little clean.  Using some fine cloth and switch cleaner, all metallic switch surfaces and battery connections were cleaned up and with a new AA battery installed, Mr. Money worked again.

Being 30 years old, there’s no silly use of electronics or other USB excesses which are, I think, ‘over used’ on modern toys.  It all adds up to something which can be repaired with basic tools and parts.

Mr. Money was ready to feast.

After testing a couple of quid through the Mr.Money’s eating cycle, I was happy for him to start his journey home.  I hope he gets used regularly and never put away in a box again.

A kids push-along toy gets a wheel repair.

Just a short write up today.

As my own children have begun to get a little older and have become more interested in, quite frankly more interesting toys, I’ve occasionally had to repair them as they’ve suffered the odd mishap.

I enjoy repairing toys and sharing the repair experience with the owner.  Looking after things and learning how stuff works from a young age will help nurture the beginnings of the engineers and scientists of tomorrow, so it’s vital that children start wielding screwdrivers as soon as they show an interest.

Through a local Worthing-based dads and children’s play group called Dad La Soul/ Don’t Believe The Hype, I’ve recently begun offering a broken toy repair surgery.  Children can bring in broken toys and together we can work out what the problems are and how to fix them.

This 4×4 push-along toy had suffered a road traffic incident which had left it missing one of its front wheels.  With only three wheels, it wasn’t going far.

Luckily, the axel and wheel stub were only push fitted on, so after taking the axel off, it was just a matter of applying some strong glue to the broken parts and leaving the wheel somewhere still and safe, while the glue set. 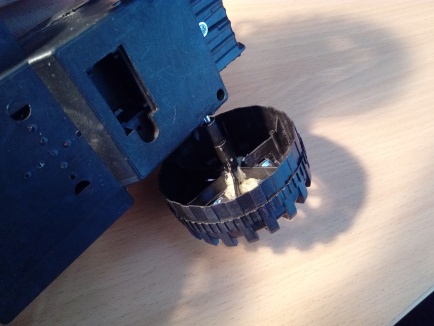 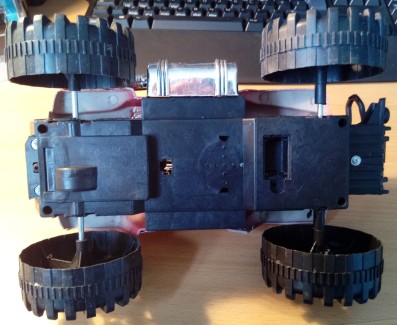 For light ABS plastic like this, I like using Gorilla glue, which seems to work well.  It won’t work for all plastic types, but it’s non-toxic and will be safe and strong for this application.

After the glue was set and dry, the wheel just simply pushed back on, ready for more ‘ragging’ around the floor.