A little DAB radio, repaired at the workshop.

A colleague of mine brought this cool little DAB radio in to the workshop as it’s once crisp DAB tones were now no more and all life from the little device, had seemed to have ceased.  It was, very much, a dead radio.  When working, it picked up every station available, really clearly and seemed to out-perform the much more expensive devices my colleague also owned.  However, after a few months in the hands of his son, the radio would no longer turn on when plugged in.

It was brought from Aldi for under £10, which seemed like a bit of a bargain to me.  It’s amazing just how much DAB radios have fallen in price in the last 5 years or so.

The Bauhn UDABR-0197 (catchy name) is a compact, portable radio and is capable of being used with either a plug-in adaptor (supplied) or 4 x ‘AA’ batteries.  When powering this radio using either plug-in adaptor or batteries, the little radio refused to do anything.  Very sad.

I always start with the basics, so I checked the power from the plug-in adaptor first, which seemed to be delivering its 5.9VDC, pretty much spot-on. As a side note, I always check the condition of plug-in adaptor leads and plugs as they seem to almost always be made of the thinnest wire available in the Far East and prone to cracking causing poor connections.  This one was fine.

Opening up the radio was really easy, just 4 cross-head screws and the two halves of the radio came apart without any major dramas.

The first thing you notice about (cheaper) small appliances like this, is the ‘lack’ of anything inside.  The circuit boards in new small devices can sometimes be multi layered affairs, using micro components, making repair with normal workshop tools very difficult or impossible.

Luckily for this little radio, the designers have had the foresight to keep the power distribution board separate from the main ‘radio’ gubbins and this seemed to be of conventional construction.

FixItWorkshop, May’18, Aldi Bauhn Radio, in for repair, PCB repaired.

FixItWorkshop, May’18, Aldi Bauhn Radio, in for repair, PCB back in position after soldering. 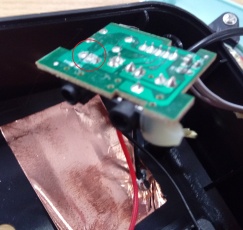 FixItWorkshop, May’18, Aldi Bauhn Radio, in for repair, broken pins.

On closer inspection of the power distribution board, it revealed a break in two of the pins from the ‘power-in’ jack socket meaning that power would not get through to the main circuit board.  The two pins were also shorting together, causing a local loop connection.  This meant than neither mains adaptor supply nor battery would power the radio.  Problem realised.

I was then able re-make the connection using a soldering iron on the board, reconnecting the pins to a spare section of copper detail on the power distribution printed circuit board.  Very satisfying.

Once the radio was back together, all screws back in place, power supply connected, the radio burst in to life, just in time for me to listen to my favourite station.  Happy days.

Cost of a new radio; £10.  Cost of repair; A bit of soldering and a cuppa plus gingernut biscuit.