A Janod Toy Phone gets opened up and stuck back together. 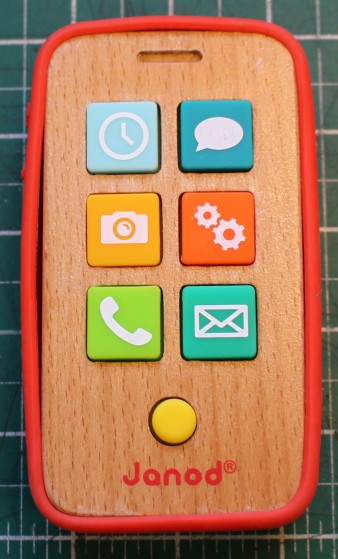 There’s always a debate to be had on what age one should give a child a phone, but as a parent, groovy toys like this are hard to resist.  I mean, who doesn’t like a toy that makes cool noises, at the touch of a button.

Cost of replacement: About £10

A friend of ours got in touch to ask if I could look at their daughter’s toy phone, which had stopped working after being dropped on a hard surface.  Despite the rubber outer cover fitted, after being dropped, the phone now rattled and made no sound.

The (adult) owners had changed the small coin cell batteries, but to no avail and were now wondering what to do, so I said I’d admit it to the workshop.

Janod.com are a French company specialising in making funky wooden toys with a retro warm vibe, while offering modern features.  I like their stuff.

However, on the repair side of things, the designer had not allowed me any service access to the rear of the phone.  It was glued.  The only way of getting in was to break the casing open to see what was going on.

Janod:  I like your products, but please consider changing your designs to allow repair.  Tamper proof screws and other child-resistant systems can be used so that only those with intent can open up the casing to perform a repair.

I used a small flat-bladed screwdriver to gently prise the casing apart and after some nail-biting moments, (I was worried I was going to snap something), the back came off.

The fault became apparent almost immediately.  The small speaker had become detached from the mounting and a wire from the circuit board to the speaker had snapped.  A little soldering and a bit of hot melt glue and the speaker was installed back where it was meant to go, ready to sound off again.

The last job was to repair the now broken case.  Since it was wooden, I used PVA wood glue on the mating surfaces and held the phone for 48 hours gently in my bench vice and now, no one would never know the repair ever happened.

The toy was returned to its owner ready to bring child happiness and parent irritation, once more.  I had to press the cuckoo noise button a few times before I gave it back.

It’s been a while since I wrote anything on my blog and for that I apologise.  The lack of writing doesn’t mean that the workshop has been gathering dust, far from it.

Ages ago, a former colleage of mine asked me to look at a Concorde Child Seat, which seemed to be automatically adjusting to it’s maxmimum height setting, in an ‘ejector’ seat style.  This kind of action is OK for 007, but no good for a family trip to the seaside.

Child seat repairs are not my usual thing, but since this one was unusable, what did I have to lose?  These seats are normally well over £140.00 too, so it seemed like a good idea to have a go.

The Concord Transformer-T features a neat trick in that it can adjust it’s height to suit the growing child, with the touch of a button.  This is especially handy when different children share the same seat.  Up and down height settings are achieved by a ‘Transformer’ (the toys) style of action, controlled by a gas damped srump strut, similar to that used on hatch back tail gates.

This seat’s gas strut seemed to go to maximum height, without warning, extending seat in an ejector seat style.  Time to dig out some tools.

The seat’s cover came off easily, thanks to to some hook and loops around the plastic backing.  Lucky as the cover on this seat had some dubious stains.

Once off, several T20 Torx screws removed and a cable operated plunger to a button on a gas strut was revealed.  This seemed like a good place to start.  Despite the premium price tag, the inner workings of the seat seemed quite flimsy, I assume to minimise weight and to comply with safety standards.  The moving headrest, back support and centre arms all moved on a scissor action mechanism, which seemed to working fine.

Disconnecting the cable/ button/ lever involved a T20 Torx screwdriver and 10mm spanner.  Once removed, there was good access to the button on the end of the gas strut.  It appeared that the button was working just fine and one could manually adjust the size of the seat with a finger.  Interesting.  Time to inspect the adjustment of the cable and lever mechanism.  Luckily, there was adjustment on the cable and lever and after a little fetling, the mechanism was restored.