A little repair on a French wall clock

This lovely wall clock had been running perfectly fine until a friend of mine decided to move it temporarily from the wall, during a recent bout of home decorating.  Now, I’m no expert on French wall clocks, but we think this one is circa 1920s or 30s, but either way, it’s a lovely thing to have in the house.  This one is also fitted with Westminster chimes, so one assumes it was made for the English market as an export item, all those years ago.

Once the paint had dried, the owner decided to re-fit the clock to its hook on the wall, but it simply didn’t run, even when fully wound-up.  Strange, what had happened?

Having a quick look at the front of the clock revealed nothing much.  The pendulum was where it should be and appeared to swing freely, as a pendulum should, but there was a slightly strange ‘double-click’ tick-tock, indicating something wasn’t right.  Clocks of this type should emit a definite even tick – tock -tick-tock.  This one wasn’t. Hmm.

Before going to see the clock, I had already decided that the small spring that suspends the pendulum could have been broken, so I packed a few spares I happened to have, just in case.  Opening up the mechanism revealed that the spring was actually intact, not bent or warped and therefore perfectly serviceable.  It was fairly obvious almost immediately that the small clasp which secures the pendulum to the escapement lever was bent and the probably cause of the problem.  All that was needed was a small amount of tinker-time to fix that with a small pair of pliers.  However, that wasn’t the end of the story.  Having undergone a ham-fisted removal from the wall, the escapement pendulum lever was now in a slightly different position and some more fettling was required to get the clock back ‘in-beat’, a common requirement on this mechanism type and often the reason why a clock won’t run, even when fully wound.

As the clock mechanism was out of the main casing (see photo) I decided to prop-up the mechanism on two tins of beans to allow the pendulum to hang over the side of a level table.  This allowed me to access to the clock’s mechanism and hear what was going on clearly.  A slight adjustment on the main pendulum lever to the right on this mechanism and the clock was back ‘in beat’, keeping good time. 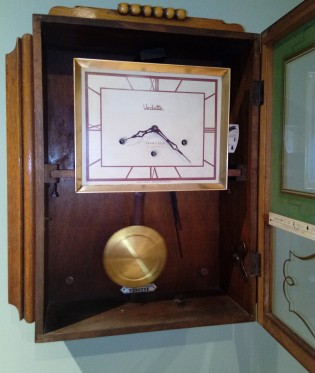 After giving the case a general clean up and polish, I refitted the clock mechanism back inside it and hung the whole thing back on its hook, back where it belonged, on the wall.

Cost of a replacement: Sky’s the limit. Cost of repair; 1 cup of tea and 1 chocolate digestive.

Hi, my name's Matt and I'm on a mission to save everyday items from the bin. Many things are repairable, but we've seemingly fallen out of love with mending things. I aim to fix that by publishing each repair I carry out in the hope that others will be inspired to repair their things and keep them for longer. View all posts by fixitworkshop.co.uk

This site uses Akismet to reduce spam. Learn how your comment data is processed.